Warning: Contains original Star Wars references that may be unintelligible for under 30’s

Over the past 15 years, the phrase “patient-centred care” has gone mainstream. Initially something my lecturers would mention at college, it’s now being used across both the research world and by clinicians themselves. Whilst there’s a lot of good things about this, there is one downside: “Patient-Centred” has become a buzzword.

Given that it’s part of my brand, you might think I’m pleased. Well, not really - in my opinion, it’s becoming vastly overused, and most clinicians are just paying lip service to the idea rather than actually practicing it. Many of these are people I know - they’re decent, good-hearted practitioners who want the best for their patients. They mean well, and think they’re adhering to the model of patient-centred practice. They just aren’t aware of their unconscious biases that let some old doctor-centred habits sneak into their practice.

I don’t blame them - I was one of them for years! And a large part of the problem is a cultural one: our society sees doctors as “fixers”. As a result, if you’re the type of person who decided to become a healthcare practitioner, you probably see yourself as a problem-solver. The patient comes to you asking for help, and you use your knowledge and expertise to find the solution. You share this with them, and typically perform treatments to correct the problem, hopefully whilst educating them how to help themselves. There’s an inherent hierarchy arising here: you are the one with the vital knowledge and skills, and the patient is coming to you asking for help.

Because of this, there’s a subtle danger that both you and your patient could slip into a somewhat doctor-centred relationship. You quite naturally (and hopefully correctly!) assume that you know the answer, and want the patient to follow your advice to reach a solution. The patient also assumes this, and often wants you to just “tell them what to do” or “fix” them. From the perspective of Joseph Campbells’ “Hero’s Journey”, you are the hero, rescuing the helpless patient from their condition. This often still works - it has been the dominant model in the West for millennia, after all - but there are risks.

Firstly, it’s this kind of relationship that encourages co-dependency. The patient wants you to “take charge”, and you want the patient to do what you tell them. In the long term this isn’t a good situation for either. The patient may well take a passive role, relying on you to do all the work and end up with more treatment than they would otherwise need. Or they may not be totally honest and forthcoming about their progress, in order to please you. You might miss vital feedback, or assume that a poor recovery is because the patient didn’t do what they were told. 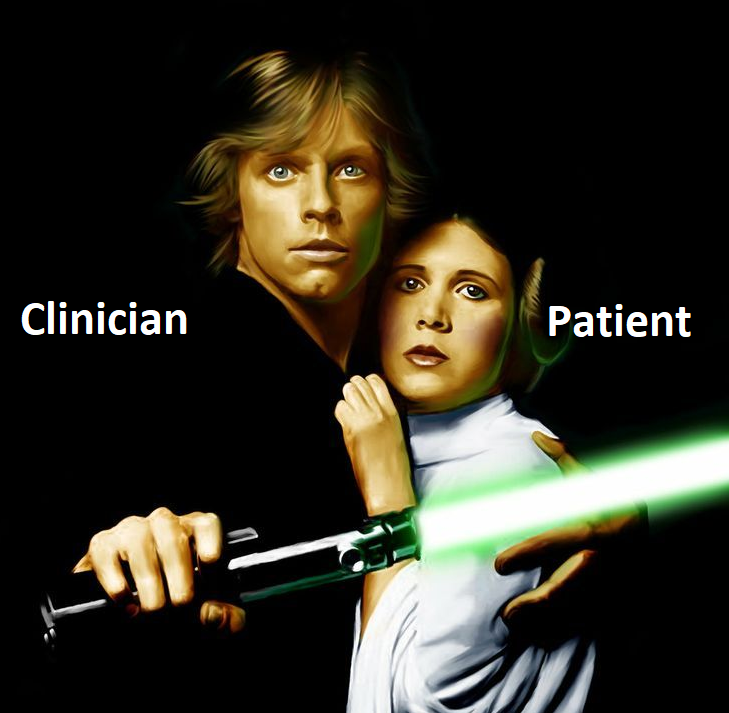 The Doctor-Centred model, where the heroic clinician saves the helpless patient

Typically this leads to a relationship that more closely resembles that of a parent-child than of two adults. The result is often frustration on both sides, a weaker therapeutic alliance, and ultimately worse results.

This mode of care also assumes that you already know what’s best for this specific patient. Whilst you hopefully know what the best treatment is for the average patient, any clinician who has been around for a while knows that there is no one correct course of action for everyone. Some patients just don’t respond the way you’d expect.

But the problem goes deeper - in this mode, you aren’t taking into account the unique circumstances of the patient’s life, or their own preferences, beliefs or wishes. These factors can have a major impact on their recovery, and sometimes they won’t recover without addressing them!

Furthermore, many of the skills I teach don’t work well in a doctor-centred approach. For example, effective goal setting requires clinicians to prioritise the patient's goal if they want to reap the benefits.

Without a true patient-centred philosophy, the doctor assumes they know the goal, and if the patient disagrees, they must be wrong - after all, the doctor “knows what’s best for them”. And if that’s the case, would the doctor even ask? And if they did, typically what would happen is that they’d try and educate about a better goal they have in mind.

I know this personally - this was how I practiced for a number of years, and how most clinicians still practice today. The patient came to me with a goal: let’s say, they’re getting headaches that make it difficult to concentrate at work. That’s fine by me, but my goal was to get them as healthy as possible - fine tune their musculoskeletal system, strengthen their posterior chain, prevent future injuries…

So I would listen to their goal, and then try and sell them on my goal instead. “Sure, we’ll take care of your headaches, but your low back could move better, and you can’t hold a side plank for 90 seconds! Also, I saw in your intake that you drink 2 bottles of wine per week, which is over the recommended amount, so we should do something about that too…”

These are all worthwhile goals - again, the vast majority of these clinicians are caring, well meaning people - but they were mine, not theirs. And trying to persuade patients to adopt my goals instead of theirs rarely worked. More often, it pushed them away - they felt that we didn’t want the same thing, or that they’d disappoint me when they didn’t decide to go for it. Which ultimately resulted in poorer results for them, and less referrals for me!

Doctor-centred care can slip in more subtly - many clinicians who consider themselves patient-centred still have some doctor-centred traits. Often these take the form of something smaller. Let's say the patient would benefit from performing a 20 minute strengthening routine each day. I’d go ahead and prescribe this, and they’d come back 2 weeks later and say they “sort of did it” - eventually confessing they did it twice. I’d chastise them for not having their priorities in order, and passive-aggressively suggest that maybe they “just don’t really want to get better”… Okay, nothing that bad, but I’d perhaps gently encourage them to try again: “Okay, but it would really help if you did them, so keep trying!”

How about an alternative approach: instead of just telling them what to do, I could enquire as to what they felt able to do:

“Realistically, what is the smallest amount of time that you’re prepared to spend on self-treatment strategies? Let’s use the worst case scenario - you’ve got a manic day and didn’t sleep well, and really aren’t feeling motivated to do much. What could you guarantee you’d be prepared to do then?”

[Note - I often ask this at the start of care, but then cut the number in half. Patients are typically very optimistic here!]

This might lead to a discussion where they share that whilst they want to help themselves, work is very stressful right now, their department is facing redundancies, their daughter failed her mock A-levels and needs a lot of help studying, meanwhile their partner broke their leg skiing last week so can’t do any chores, and they’re trying to prepare their father for moving into a retirement home… Oh, and their dog just died.

I exaggerate to make the point, but you get the idea. Life is hard sometimes!

As much as this person technically could carve out 20 minutes of their day for me, it’s a pretty unrealistic thing to ask right now. But maybe they feel they could do 5 minutes in the morning? Or they could do 20, but only on the two days a week they finish work early.

In that case, it’s likely going to be far more effective to change the exercises to fit their routine, rather than the other way around. As well as that, just by having that discussion you’ve shown them you care, and understand that they’re doing the best they can with what they have. That’s a great way to strengthen the therapeutic alliance and improve outcomes.

This is an example of patient-centred care, putting the patient and their needs centre-stage. Instead of being the hero who rides in to save the day, the doctor is the guide. They still have all that expert knowledge, but they’re not making decisions single-handedly. It creates a partnership that respects the patient and their autonomy, as well as empowering them to take charge of their own health and recovery. Together, the two of you create a unique plan for them, using a shared decision making approach rather than traditional paternalistic prescriptions.

As I sometimes reply when patients offer to simply defer to my expertise:

“Yes, I’m an expert on the spine, but you’re the expert on you. So when we’re talking about your spine, we need both of our expertise” 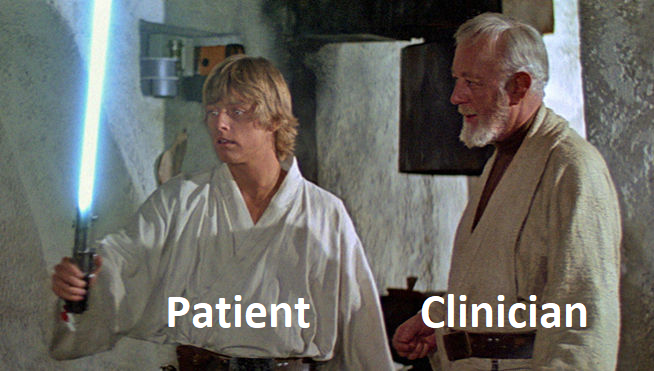 This exemplifies what truly patient-centred care looks like - it’s a partnership, but with the patient in the driver's seat. The patient is now the hero, and our role is that of the mentor / guide (I’ll go into the Hero’s Journey and how it applies to your care in an upcoming post).

Want to learn more about how to avoid doctor-centred practices? My upcoming online course will teach you a plethora of skills to avoid these traps, empower your patients, and get better results!

Cancel reply
{"email":"Email address invalid","url":"Website address invalid","required":"Required field missing"}
We use cookies on our website to give you the most relevant experience by remembering your preferences and repeat visits. By clicking “Accept”, you consent to the use of ALL the cookies.
Cookie settingsACCEPT
Manage consent

This website uses cookies to improve your experience while you navigate through the website. Out of these, the cookies that are categorized as necessary are stored on your browser as they are essential for the working of basic functionalities of the website. We also use third-party cookies that help us analyze and understand how you use this website. These cookies will be stored in your browser only with your consent. You also have the option to opt-out of these cookies. But opting out of some of these cookies may affect your browsing experience.
Necessary Always Enabled
Necessary cookies are absolutely essential for the website to function properly. These cookies ensure basic functionalities and security features of the website, anonymously.
Functional
Functional cookies help to perform certain functionalities like sharing the content of the website on social media platforms, collect feedbacks, and other third-party features.
Performance
Performance cookies are used to understand and analyze the key performance indexes of the website which helps in delivering a better user experience for the visitors.
Analytics
Analytical cookies are used to understand how visitors interact with the website. These cookies help provide information on metrics the number of visitors, bounce rate, traffic source, etc.
Advertisement
Advertisement cookies are used to provide visitors with relevant ads and marketing campaigns. These cookies track visitors across websites and collect information to provide customized ads.
Others
Other uncategorized cookies are those that are being analyzed and have not been classified into a category as yet.
SAVE & ACCEPT